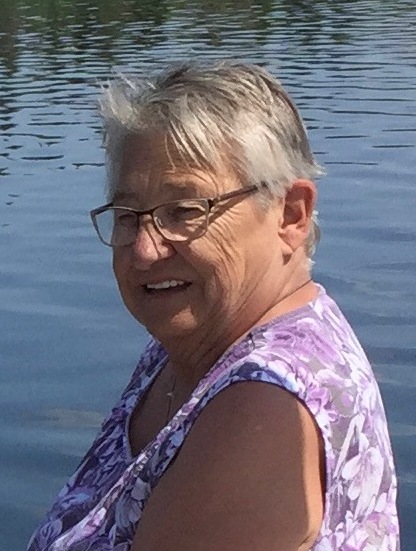 Please share a memory of Shirley to include in a keepsake book for family and friends.
View Tribute Book

Shirley was born on April 26, 1950, in Kimberley B.C.  The family moved to Saskatoon, then to Laird where she finished public school.

It was at this time that Shirley met Gary, sparking a romantic relationship that lasted to the day of her death.  They were married on Nov. 9, 1968, in Laird.  They had two sons – Wayne and James – who were the lights of her life.  She was an active supporter of the boys’ sporting activities, attending their events and cheering them on.

Shirley was active in community events, lending a hand where needed and attending functions related to Laird and her sons.  Later, Shirley supported Gary in their garage business, doing books and sometimes filling in as the parts manager.  While these were not her favourite things, she dedicated herself to the task.  They also became heavily involved in the Laird Arena activities, with Shirley taking charge of the canteen.  She always enjoyed seeing friends and catching up on the latest news.

Camping became another large part of the Fischer family, Fir Lake being a place near and dear to her.  She was happiest being surrounded by family (both immediate and extended), and her boy’s friends.  There was always a large crew around, partaking in water sports and having fun.  One of Shirley’s fond memories of Fir Lake was the impromptu regatta that she spearheaded.

Shirley and Gary discovered Delaronde Lake in 1992, and it soon became their new “second home”.  Eventually, they bought a lot and moved from the campground.  They spent most of their time in spring, summer, and fall at the cabin.  Shirley and Gary loved being on the lake in the pontoon boat, fishing, and having laughs with friends or family.  Shirley had a great view from their living room window and enjoyed watching all the birds coming to the feeders.  She loved seeing the foxes, squirrels and bears moving through the yard. Her other special spot was Mexico, where she and Gary enjoyed the sun and ocean view.

Eventually, Shirley and Gary retired permanently to the cabin.  Shirley spent time baking and cooking, taking great pride in her flowers, and entertaining.  But her most special times were when the boys and families came to visit.  She loved being surrounded by them all, sharing in the activities the lake offered.

Memorial Donations can be made

in Shirley’s name to:

or online at www.heartandstroke .ca

To send flowers to the family or plant a tree in memory of Shirley Fischer, please visit Tribute Store
Saturday
29
October

Look inside to read what others have shared
Family and friends are coming together online to create a special keepsake. Every memory left on the online obituary will be automatically included in this book.
View Tribute Book

Share Your Memory of
Shirley
Upload Your Memory View All Memories
Be the first to upload a memory!
Share A Memory
Send Flowers