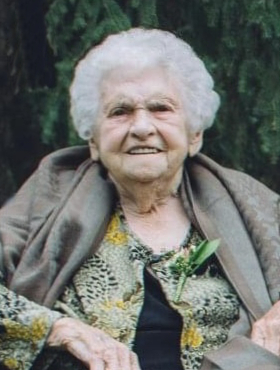 Please share a memory of Dorothy to include in a keepsake book for family and friends.
View Tribute Book

She spent her childhood in Eatonia with her brother Edgar and sister Jennie.

She married John Andrew Fast, 13 years her senior, on October 18, 1947, in Duck Lake wearing a special version of her signature pantsuit - this one turquoise with a red rose corsage.

They lived in Saskatoon and then Rosthern where Dorothy worked at the Dairy Pool. When John's father passed away, they moved again onto their farm outside Rosthern to run the operations and support his mother. Together, he and Dorothy made a life there. They had two children, Mitch and Timothy, and the four of them led a busy, productive farm life. They raised cattle, hogs, and poultry, and produced some of the most delicious meat in the area.

In addition to working at the Dairy Pool, Dorothy kept busy volunteering at the local skating rink, the agricultural society, and the tourism office. She co-founded the Valley Action Board, now Valley Action Abilities, an organization committed to helping local handicapped people. She was honoured to receive the Rosthern Citizen of the Year Award for these and other efforts.

Dorothy loved to travel, particularly with her best friend and sister-in-law, Toots. The Maritimes were a favourite destination. Hijinks included the time her underwear caught fire when hanging to dry over a lamp. She also liked to tell the story of calling collect to John while away on one of her travels; the operator said, "A collect call from Dorothy". He replied, "Who??" John affectionately called her Do, and she was known to her friends by just about everything but Dorothy: Dotsy, Dodo, Dode.

Dorothy and John loved having big gatherings of family and friends at the farm, with Dorothy feeding and hosting many loved ones. New Year’s parties in particular brought people together, as it was also John's birthday.

As John looked to retire, they sold off their animals, while Dorothy continued her volunteer work, spending time at the senior’s hall, and enjoying visits from their granddaughter. After losing her husband in 1999, Dorothy stayed on the farm for many years until the drive into town got too hard. She then transitioned to living independently at a new home in Rosthern.

Dorothy was very bright, and loved murder mystery puzzles, sudoku, and crossword puzzles. She never got sick, a fact she boasted was due to her regular dose of Vitamin C (and quite possibly influenced by her aversion to doctors and hospitals).

After Dorothy broke her hip in a fall, she moved into the Rosthern Mennonite Home. She had a feisty spirit and was known as a great competitor in the sports activities at the home. She looked forward to outdoor visits with family and her daily phone calls from her daughter-in-law Yvonne.

This summer, she was able to meet her first great-grandson Ronan, newly born. When she was asked what she thought of him, she smiled happily and replied, "perfection".

Dorothy and John are survived by their two sons Mitch and Timothy, granddaughter Molly, and great-grandson Ronan.

Her family thanks the staff at the Rosthern Mennonite Home for providing her with exceptional care throughout her stay, especially during these pandemic years.

A private graveside service will be held at Rosthern Cemetery, Rosthern, SK

Share Your Memory of
Dorothy
Upload Your Memory View All Memories
Be the first to upload a memory!
Share A Memory