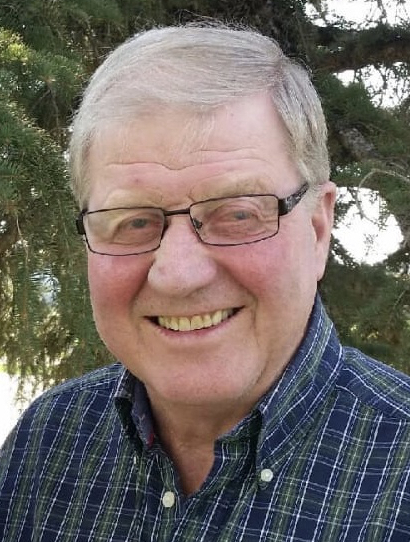 Robert was born October 26, 1943, in Saskatoon to Erwin and Selma (Dueck) Regier. Robert grew up on a mixed farm north of Laird with his four siblings.  He loved the life of the farm, working with cattle and grain.  He attended the Tiefengrund School until Grade 9 after which he attended Rosthern Junior College for Grade 10 – 12.  He was baptized and became a member of the Tiefengrund Rosenort Mennonite Church on June 6, 1960.

Robert was an excellent ball and hockey player, playing for the Laird Jets, Rosthern Juveniles, and Rosthern Wheat Kings.  He enjoyed playing these sports from a child until his twenties.

Robert and Marion were blessed with three daughters, Sheralyn (1969), Nadine (1971), and Tracey (1973).  Robert and Marion instilled a love of farming, music, and faith in their three girls.  Robert was always very proud of his daughter’s achievements in school, sports, and music.

Robert and Marion sold their successful dairy business in 2006, after milking cows for 40 years.  Robert started a herd of Purebred Polled Herefords before he sold the dairy.  He continued to raise Herefords and commercial cattle until his passing.

Robert’s faith was important to him. He was an active member in his church and was involved with various committees. Together with Marion, they directed the junior and children’s choir.  He had a deep love of music which included singing in church and community choirs, quartets, Male Melodies, and the Carlton Quackgrass Band with his cousins Ted and Karl.

Robert was involved in the community as a rep on the Rosthern Agricultural Society, the Northern Lite Holstein Club and Prairie Meadow Place.

Nothing made Robert prouder than his two grandchildren, Ian and Mikayla. He loved attending their hockey and soccer games, choral concerts, and recitals.

Robert was diagnosed with pancreatic cancer in July of 2021.

Robert passed away peacefully on Wednesday, June 22nd at the Rosthern hospital with family by his side.

The family would like to thank the doctors and staff at the Rosthern Hospital, Royal University Hospital (Saskatoon), Saskatoon Cancer Centre, and the Rosthern Ambulance for their exceptional care of Robert.

He is also survived by his siblings Leonard and Anne Regier, Les and Lil Regier, Norma and Wallace Brandt, Elaine and Mark Suderman, and Marion’s siblings, Dennis and Pauline Roth, and Delmar and Linda Roth, as well as many nieces and nephews.

Robert was predeceased by his parents, Erwin and Selma (Dueck) Regier, and parents-in-law, Wilmer H. and Elsie (Epp) Roth.

Viewing will be held at the church

A video recording of the service will be available after the funeral on Robert’s obituary page at www.funksfuneralhome.ca

Memorial Donation can be made in Robert’s name to:

To send flowers to the family or plant a tree in memory of Robert Regier, please visit Tribute Store
Thursday
30
June

Share Your Memory of
Robert
Upload Your Memory View All Memories
Be the first to upload a memory!
Share A Memory
Send Flowers