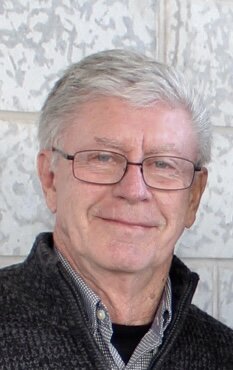 Harry Waldo Harder was born at Waldheim, Sask. on Dec. 5, 1940, the middle child of 7. His parents were Peter and Katherine Harder. He grew up close to the North Sask. River for the first 7 years of his life and later 4 miles west and 1 mile north of Waldheim.

He asked the Lord into his life at an early age and was always active in the church, singing in the choir, teaching Sunday School, Sunday School Superintendent and singing in a quartet called the Heraldairs. He attended Briercrest Bible College and graduated after 3 years with a pastors diploma.
In his early teens, when the polio epidemic went around, the family was not spared, and he as well as his brother Art both were paralyzed. The doctors said he wouldn't walk again, but by Christmas of that year, he was ice skating!

When Harry was a young boy, he discovered a space where he thought a rib should be on his body, and he exclaimed “There's a wife out there for me. I have a missing rib”! It took him awhile to find this wife, but in January of 1969, he met Darlene Klassen from Swift Current, Sask. when she came to his church to play piano for a quartet from there. They met in January, got engaged in August and married October 25, 1969 – a whirlwind romance that lasted 52 1/2 years.

In January 1971, their first daughter Lorelle, was born; in August 1974 son Jeremy arrived (Darlene got flowers for that one!) and in August 1979 daughter Suzanne came to bless the family and make it complete.

Harry was a farmer for 40 years, always fixing whatever broke, and being a general handyman. He wanted to retire at 55 so he could pursue his hobbies, like woodworking, but he was 60 before he retired. He had a big shop that was FULL – he said he needed junk to get inspiration for creating things.
Harry was known for his strong convictions that he stood by, sometimes at the expense of relationships, and he regretted that.

In 1996, tragedy struck when daughter Suzanne, almost 17, rolled the car a mile from home and was taken from us. Such a shock for the family and community. Our family was no longer complete. But the family was blessed with spouses for Lorelle and Jeremy, and then 8 beautiful grandchildren.

In 2005, Harry and Darlene built a beautiful new home in Waldheim, their retirement home. He had a shop that was FULL again and created things, some welding projects, but mostly wood. They also had more time so even though they had been involved in volunteering at Camp Kadesh and Redberry Camp before, now they could spend longer periods of time out there. It was a highlight of their lives, along with 2 trips to Maui and a cruise of the Caribbean. Life was good!

In 2013, Harry suffered a stroke which he mostly recovered from very quickly. Two years later to the day, he had to have triple bypass heart surgery. From there, health issues continued to bother him. On Father's Day, while waiting for the kids to come, he had an ischemic attack which ultimately took him from us Wednesday morning. He took one last breath and peacefully entered eternity.

In 2016, after attending Blaine Lake Gospel Chapel for about 4 years, Harry and Darlene felt called to move to Blaine Lake, so they could help out in the church better. They made many new friends in the church and community, and they truly felt blessed to be so accepted. They built a beautiful new home, again, their retirement home. But now he's gone on to his final retirement home. Lucky guy!

Harry is survived by: his wife Darlene;

He was predeceased by his parents; daughter Suzanne; brothers Sam and Art, and sister Renata Dickman and father-in-law Henry Klassen.

To send flowers to the family or plant a tree in memory of Harry Harder, please visit Tribute Store
Saturday
25
June

Share Your Memory of
Harry
Upload Your Memory View All Memories
Be the first to upload a memory!
Share A Memory
Send Flowers