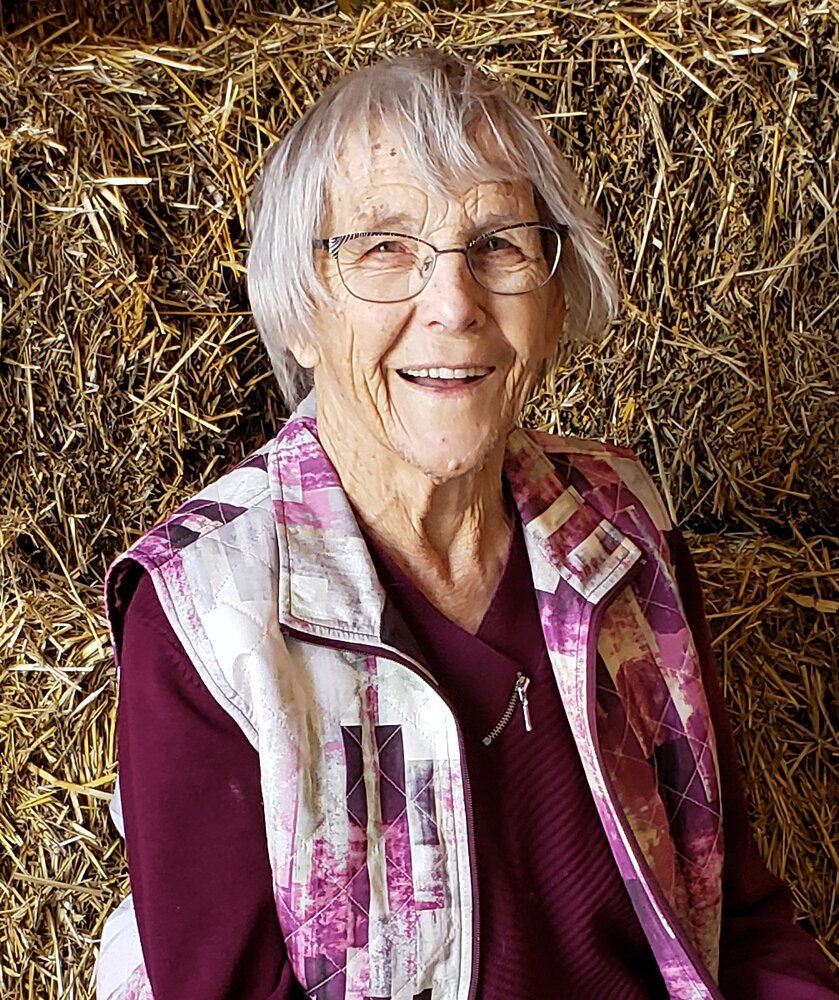 Mary (Froese) Krause was born December 4, 1926, in Lysanderhoeh, Russia.  At the tender age of 7 months, she emigrated to Canada with her parents and 4 siblings, landing in Rosthern.  From here, the family moved to Hawarden, and eventually to the Sheldon District, near Hanley, Saskatchewan, where she grew up.  She attended the Hanley (Sheldon) Mennonite Church, was baptized by Rev. J.J. Thiessen, and became a member.

Mary received her elementary education at the Sheldon School and completed her high school at Rosthern Academy (Rosthern Junior College).  She attended Saskatoon Normal School (Teacher's College) and received her permanent certificate.  Her first teaching position was at St. Istvan School at Esterhazy, Sask.  After that, she taught at Johannesthal School at Rosthern.  It was there that she met her future husband, Harold Krause, and they were married August 16, 1951.  They were blessed with two children, Larry Allan, May 11, 1959, and Sherryl Marie, July 18, 1965.

Harold was a farmer, so Mary exchanged her teaching profession for a farming career.  She was involved in all the farming activities, and besides that had a large garden - she always maintained the gardens were of necessity, but the flowers were there to enjoy.  Her many flower beds and rock gardens attested to that.  Later, when they moved to town, she would shrink her garden, but her flowers still took priority.

Besides farming, Mary was involved in many activities.  She served on the R.J.C. Ladies' Auxiliary for many years.  She volunteered her time as a member of the Hospital Auxiliary until it dissolved.  She was a founder and worked as volunteer at the Clothes Basket since its official opening in 1976.

Church attendance and church related activities have always been important to her.  She transferred her church membership to Eigenheim Mennonite Church, was always an active member (whether in the worship service or Sunday School) and enjoyed being involved.  Another involvement was the Eigenheim Women's Fellowship, where she was always willing to lend a helping hand.

Mary and Harold took time to travel.  They made several trips to Germany to visit her relatives.  They enjoyed travelling by car and added many miles (later kilometers) on their vehicles travelling through a good part of North America.  They were always thankful to arrive home safely.

In 1987, they decided to move to Rosthern.  A move such as that brought changes.  They could now spend more time with their grandchildren.  Mary enjoyed having them spend time at her home.  They were very precious to her, and she was proud of their accomplishments.  She followed their activities, whether hockey, soccer, football, or skating. She was always there to watch their every move and to cheer them on.

But time moved on, and brought with it more changes.  In 2011, Harold passed away, now the house seemed too big, the pleasures of caring for flowers and garden waned - it was time to downsize.  In 2013, Mary moved to a condo in Genesis Estates, where she enjoyed the company of the other residents.

Early 2020, saw another move, to a suite in Prairie Meadows.  This was a time when she appreciated her new surroundings, and rekindled friendships with many Eigenheim friends who also resided there.  It was also a time where she found a great deal of good fortune playing Bingo, as the shelf full of the chocolate bar winnings proved.

In the late fall of 2021, she briefly took up residence at Sunrise Place, where she found the staff to be friendly and helpful.

****FUNERAL POSTPONED BECAUSE OF WEATHER*****

The family would like to thank the Doctors and Nurses at the Rosthern Hospital for their kindness and consideration in Mom's care.

To send flowers to the family or plant a tree in memory of Mary Krause, please visit Tribute Store
Friday
11
March

Share Your Memory of
Mary
Upload Your Memory View All Memories
Be the first to upload a memory!
Share A Memory
Send Flowers