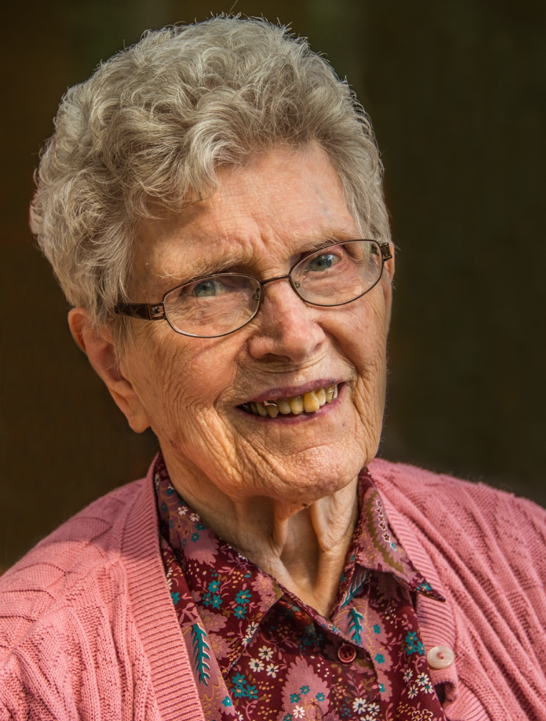 Tina (Harder) Doerksen died January 8, 2022, in the Mennonite Nursing Home, Rosthern, Saskatchewan, at the age of 99 years and 9 1/2 months.

She was born March 25, 1922 in Fischau, Molotschna Colony, Ukraine, to Helene and Heinrich Harder. When she was three, she immigrated to Canada with her parents and sisters Helen and Gertrude. The family eventually settled on a farm near Winkler, Manitoba. They added daughters Margaret and Susie and an adopted son Benjamin.

Tina, as well as her siblings, had good memories of growing up on that farm, which they called Poplar Grove. They attended the Birkenhead country school, walking the mile and a half in nice weather and being transported by sleigh in winter. She took grades 9 and 10 by correspondence, then roomed in Winkler for grades 11 and 12. She then attended what was known as Normal School in Winnipeg to qualify as a teacher.

In the memories she recorded for us children, she said she felt that God’s special calling on her life was working with children. She was a good teacher. She taught in several rural one-room schools—two years in Blumstein and two years in Friedensruh—and also was active in Sunday school and VBS work. After she married, she would eventually have eight children of her own to raise, and later in life occasionally worked as a substitute teacher.

Tina responded to the message of Jesus as a child. She was baptized by her father in a creek on August 18, 1935 at age 13 and joined the local Mennonite Brethren Church. She remained a dedicated Jesus follower and loyal church member the rest of her life.

At age 20 she became acquainted with Peter Doerksen of Gem, Alberta, a student at the Bible school in Winkler, when he came to their house to have some mending done. They corresponded for several years. He later attended Mennonite Brethren Bible College in Winnipeg, and when she was 24, they were engaged. She said she liked his “no-nonsense” approach to life, his commitment to God, and his high ideals and integrity. They shared a desire to be missionaries. They were married June 28, 1947 by Tina’s uncle, David Derksen, in the old Winkler MB Church. Tina sewed her own wedding dress.

The first years of marriage included two years at MBBC where she took classes and Peter graduated, then periods in Gem, Alberta, where Peter taught winter Bible school, in Chilliwack, B.C., and a short term in Mexico to explore missionary service. Their goal to be missionaries with the MB Mission did not come to fulfilment but 1954 found them in Linden, Alberta with Peter as pastor of the MB church there. They lived in Linden some 12 years, even as Peter transitioned from pastoral work to teaching. Tina was home with the children—four sons and four daughters, who arrived in regular intervals of about two years, except for the last, at three years—but also found time to nurture many friendships in the church and community, as well as start the Pioneer Girls program in the church. She reached out to people and fostered friendships wherever they lived. She was outgoing and hospitable.

From Linden, the family moved to Manitoba, first to Alexander, then Brandon, then Carman, where she was again wife of the pastor, also in Debolt, Alberta and Niverville, Manitoba. Tina always participated actively in Peter’s ministry—she simply believed his calling encompassed hers—but she also got involved in endeavours of her own, such as being president of the group that organized an MCC thrift store in Carman. For his part, Peter drove her wherever she needed to go, as she had tried to learn to drive but not succeeded.

Peter and Tina retired in Winnipeg, living in several apartments there and then in Donwood Manor, first on the independent living side and then the care side. They did short-term ministry in Snow Lake, Manitoba, and—in a particularly happy experience of the retirement stage of their life—served alongside the Tulpengasse Gemeinde in Vienna, Austria. They also greatly enjoyed some travel—to Europe, Israel, Egypt, and India, as well as many visits to see children and grandchildren in various parts of Canada. These years also brought all the Harder sisters together in Winnipeg and they met regularly for breakfasts out and for other visits.

From childhood on, Tina loved to read. She treasured her books, many of them theological in nature, and kept reading as long as possible. She also kept up with world news. In her later years, she was keen to learn computer and used it for keeping in touch with family. At around 80 she set down memories and “advice” in a book of prompts given her by Norm, which was then typed and presented to her children. This is still good reading.

When Peter got Alzheimer’s disease and had to move into the care side of Donwood Manor, she found the changes in him, as well as their separation, very difficult. She spent time with him every day, and ate meals with him too, as long as she could. He died December 28, 2009. She herself faced various health challenges and surgeries over the years and in her later aging was both immobile and beset by increasing dementia. In fall of 2015 Tina was moved to the Mennonite Nursing Home in Rosthern, Saskatchewan to be closer to daughters Louise and Linda in her final years.

Tina was predeceased by her parents and her siblings, her husband Peter, all her siblings-in-law except for Betty Schulz, and sons-in-law Norm Foth and Helmut Dueck. She is remembered with love, admiration, and gratitude by her children Al (Agatha), Dora Dueck, John (Barb), Victor (Doris), Norm (Moira), Linda Foth, Louise Braun (Eric), and Viola Kaethler (Terry); 24 grandchildren and partners, and 54 great grandchildren. Indeed, her children and grandchildren, in the words of Proverbs 31:28, “rise up and called her blessed.”

The family is grateful for the kindnesses and care Mom received over the years from staff of both Donwood Manor in Winnipeg and the Mennonite Nursing Home in Rosthern.

Memorial Donations can be made in Tina's name to the Mennonite Central Committee of Saskatchewan, 600 – 45th Street West,Saskatoon  SK   S7L 5W9

No public service will be held.  Interment of her ashes will take place at a later date in Glen Eden Cemetery, Winnipeg, MB.