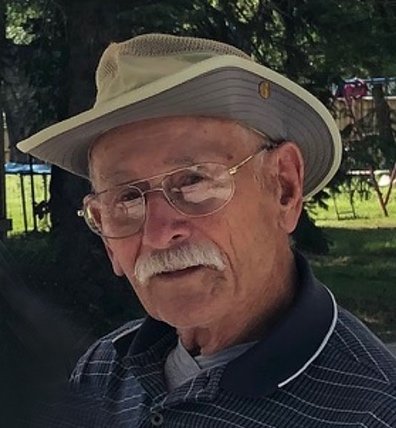 It is with great sadness that the family of Henry Loewen announce his peaceful passing on April 25, 2020 at the Rosthern Hospital. Henry was born on April 2, 1932 to George & Margaret Loewen of Silberfeld MB. Henry was in the middle of 11 children. He attended the one room school in their district until the age of 14 when he quit to help on their family farm. His work ethic, the desire to do a job right the first time, stayed with and exemplified Henry for his entire 88 years.

When he was 18 years old he met Mary Harder of Schanau MB at a ball game. He was immediately smitten with her and they began dating. They were baptized together on confession of their faith in Jesus Christ at the Bergthaler Church in Altona and later were married on Nov 16, 1952 at the same church. Henry & Mary started their married life working together for a dairy farmer for the grand total of $75.00 per month! They later moved to Altona, where Henry worked as a carpenter for a year. While Henry began as a truck driver at the Altona Co-op, his ultimate goal was to work up to a management position. He worked hard at whatever task he was given and took classes to upgrade himself. Henry always worked six days a week with only Sundays off. Through his hard work and determination, Henry became service station manager in the Altona Coop and later became the general manager in the Coop store. He also was the general manager in the Boisevain Coop. During this time four children were born to Mary and Henry: Harold in 1954, Susan in 1957, Dennis in 1960 and Jane in 1964.

They enjoyed big family gatherings with lots of aunts and uncles and cousins. Henry had opportunity to do some golfing at Gretna and it soon became a great pleasure of his. Sundays were full with Sunday school and church, then off to grandparents on either side of the family for Faspa. In 1982 Henry and Mary pulled up roots and moved together with their son Harold to Waldheim SK. Henry was the general manager of the Marcelin Coop for five years. He would leave early in the morning, even through snow storms to oversee the running of the store. Their son Harold worked at Menno Industries for many years and was especially pleased to run the Mini golf. Mary initially volunteered and then worked in the workshop teaching the ladies to quilt. They were soon meeting their neighbors and getting to feel at home in the community of Waldheim.

Following retirement, Henry took on a few other jobs including working for the Waldheim Hardware, Team Fuel service station and even the Saskatoon Coop. It was at this time that our community began to notice Henry and his huge contribution wherever he participated. He gave back to our community by serving on various boards including Waldheim Town Council, Zoar Church board, the Menno Home board, The New Horizons board and at the Valley Regional golf course. Henry loved golfing with Mary and many friends including Lorne Ratzlaff, Bob Magee, Benno Klassen, and John Andres and others. Henry also accomplished a hole in one in Waldheim. Later on, when his daughter Jane moved to Waldheim, you would often see them out in Henry’s golf cart heading for the course. Over the years he worked hard to ensure that improvements were made to the golf course and was pleased with the results. Sadly in 1995 their son Harold passed away suddenly. Henry and Mary stood together with their faith in God, helping each other through this devastating loss. We know that Henry would have rejoiced on Saturday morning as he was reunited with Harold in Heaven.

Henry also enjoyed keeping his yard meticulous on Pineridge Crescent. His grass was lush and green with flowers, bird feeders, and yard ornaments added, to share the beauty of their yard with others. He was a great help to many neighbors who came and went from the crescent. Henry enjoyed coffee times, chats outside and working on projects together with his neighbors. Henry had a heart for helping others. This reached beyond our community as he volunteered for trips with Mennonite Disaster Service to Missouri and to a community in Manitoba devastated by a flood. Henry was a leader and a very capable worker. He always made a difference wherever he could. Henry and Mary have attended Zoar church since they moved to Waldheim. He would do whatever he could to help at church including ushering, setting up and taking down tables and chairs, mowing and cleaning. He was greatly appreciated by his church community for his conscientious work as a caretaker and treasurer for many years.

When Henry and Mary moved over to the duplexes behind the lodge, Henry continued to work hard volunteering to keep everything running smoothly. As a hardworking volunteer, he mowed grass, shovelled and blew snow until last year at the age of 87. He would often be up at 5:00 a.m. to blow snow for all the duplexes. His work in the Waldheim New Horizons was second to none. Every day he was working behind the scenes to make sure all was running smoothly. He was treasurer for almost 20 years. As the caretaker, he kept the facility shiny clean and was forever putting up tables and chairs and taking them down. He looked after the hall rental, helped initiate the guest rooms and looked after their rental and cleaning. Henry locked and unlocked our hall every morning and every evening. He served coffee and toast for many years on Mondays to all the coffee drinkers. He applied for grants to keep our New Horizons funded and always sat at the door for the senior monthly entertainment nights. During his recent illness it has taken many, many people to try and fill his big shoes and keep the hall running. Thank you, Henry! Henry was humble and never sought attention. However, he was honoured several times for his significant contribution and service to our community. In 2014, Henry was nominated for the Saskatchewan Senior volunteer awards for Exemplary Community Leadership. Henry and Mary, along with friends went to Regina for the awards night. They enjoyed a delicious banquet and then Henry rose to his feet at the table as they read all of the contributions he had made to the seniors in our community. He was honoured by congratulations and had his picture taken with the Lieutenant Governor Vaughn Schofield. It was a very well-deserved nomination. In 2014, we had a very special day in Waldheim where CTV came out and reported on various activities in our town. There were people everywhere and it was such an exciting day for our community. Henry was surprised and pleased to be nominated as our “Hometown Hero”. The plaque he received read: Hometown Hero Congratulations to Henry Loewen. In recognition of your hard work and dedication to your community. From all your friends at CTV” It was a well deserved award!

Henry was always a very young man for his age. In fact, people couldn’t believe he was in his late 80’s. He was energetic, sharp as a whip and always looking for ways to help others. He was known by all to be honest, kind, and quiet – a gentle soul. He loved talking with people and always took an interest in what was happening in our community. Henry enjoyed driving. Mary and Henry made great memories on the trips they took to Branson, the Black Hills and other places. They also enjoyed going out for supper, celebrating their family and friends’ birthdays, anniversaries and special get-togethers. Most of all Henry loved his family. Mary was his first love and even after 67 1/2 years of marriage, they still held hands and enjoyed each other’s company. They had gone through many ups and downs together and had clung to the Lord and each other to help them through. They graciously took care of each other through sickness and in health.

Henry loved his children and his grandchildren. He always looked forward to each visit and a chance to share good food, fun and conversation together. He was so happy to enjoy his great granddaughters Sophia and Brooklyn. Henry was proud of his family and they loved him deeply in return. Henry was predeceased by his son Harold, his parents, and his siblings Tina, Dora, Marge, John and Jake. He is survived by his wife, Mary and his children, Susan (Ken) Wiebe, Jane Loewen and Dennis (Rose) Loewen. His grandchildren Jennifer (Fred) Wiebe- Howarth, Derrick (Vanessa) Loewen and Jessie (Cailynn) Loewen will always treasure their memories with their grandpa. And little Sophia and Brooklyn will miss visiting great grandpa. His siblings Anna Rydman, Mary Klassen, Eva (George) Zacharias, Trudy Thiessen and Benno (Mary) Loewen will always remember their childhood and good lifetime memories of Henry.

Henry’s family wishes to thank Dr. Sami from the Cancer Centre, Dr. McMillan for going over and above in kindness, doing all that he could to help Henry. As well, they are grateful for the kind care of the Rosthern Hospital nurses and staff who kept Henry as comfortable as they could in the last week of his life. So Henry, as we promised you, your family, friends and community will do our best to take care of Mary for you.

You have been greatly loved and are already missed so much, not only by your beloved family, but also by your friends, your church and your community. With your passing, you have left such a big hole in our lives. Thank you for a life so-well lived with open and caring hands. We look so forward to seeing you in Heaven again. Blessed be your memory! A Private Graveside Service will be held on Wednesday, April 29, 2020 at Waldheim Cemetery.

To send flowers to the family or plant a tree in memory of Henry Loewen, please visit Tribute Store
Services for Henry Loewen
There are no events scheduled. You can still show your support by sending flowers directly to the family, or planting a memorial tree in memory of Henry Loewen.
Visit the Tribute Store
Share Your Memory of
Henry
Upload Your Memory View All Memories
Be the first to upload a memory!
Share A Memory
Send Flowers