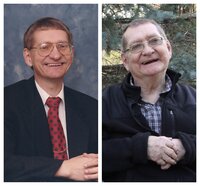 Charles Boehr, age 70 years, of Grunthal, MB. passed away on Friday, September 3rd, 2021, at the Bethesda Regional Health Centre, Steinbach, MB. Charles Henry Boehr was born at Saskatoon, Saskatchewan on January 24, 1951, to Sam & Linda Boehr. His early years were on the farm south of Dalmeny in the Wurtzburg School District. The Boehr family moved to Dalmeny when Charles was in Grade 4. At the age of 9 he recognized his need for God's forgiveness and accepted God's free gift of salvation. "It is by grace you have been saved." Eph 2:6 Throughout his life, Charles sought to extend God’s grace to others. Following High School, Charles attended Bible School at Pamburn for one year. After several years of Chicken Farming south of Dalmeny, he sold his farm and continued his education. His love for God and God’s Word and his love for people gave him the desire to become more equipped for ministry. One year of studies at Canadian Bible College in Regina was followed by two years at Columbia Bible College, Columbia South Carolina where he graduated with his Bachelor's degree. Charles returned to Saskatoon Circle Drive Alliance Church where he had been attending for several years. He served as an Interim Pastor of the Singles Ministry. Charles married Eleanor (Ellie) Klaassen on May 21, 1988. Together Charles & Ellie moved to Portland Oregon where they attended Western Conservative Baptist Seminary and in 1990 Charles graduated with a Master of Arts in Counselling Ministry. Charles began as Pastor to the Grunthal EMB Church in July, 1990. Grunthal very quickly became home. In 1994 Charles and Ellie and family began small animal farming and continue to supply animals for the pet market. Travis Charles was born on June 11, 1991. Jordan Shawn was born on December 16, 1993. Heidi Julisa was born on May 6, 1996. Heidi married Adam Friesen on September 3, 2016, and Charles welcomed Adam into our family. Lilliana Aurora Friesen was born on February 27, 2020. Charles took a very active interest in the lives of all four of our children and he delighted in being Lilliana's Grandpa Boehr! Charles received a Kidney Transplant in 2010. Although there were many challenges during the last 11 years, the donor kidney served Charles well. Charles often acknowledged his dependency on the Lord for daily strength through all of his health struggles. Charles passed away on September 3, 2021, at the Bethesda Regional Health Centre due to complications of Covid-19. We want to express our deepest appreciation to all the Medical personnel who provided excellent care for Charles and for us as a Family. He is survived by his wife, Eleanor (Ellie) Boehr, nee Klaassen, their three children, Travis Boehr, Jordan Boehr, Heidi & Adam Friesen, and granddaughter, Lilliana Friesen. He is also survived by his sister Jenny Funk and her family; Chris Funk; Ryan & DeAnne Funk, Emily, Natalie, Zachary; Stefan & Katrina Funk, Tyler, Jayella, Sofia. His brother Wes & Yvonne Boehr and their family; Jeremy & Jane Boehr, Soren, Mira, Wesley; Jenna & Cody Penny, Noah, Jude; Sheldon Boehr; Russel Kulyk. His brother-in-law, Allan Engdahl. As well as the extended Boehr family, the extended Janzen family and the Klaassen family, Norman & Dela Klaassen; Roland & Tammy Klaassen, Adam Klaassen, Brett Harder, Alex Harder; Arnold & Bertha Klaassen, Chris Klaassen & Madelaine Scrimbitt; Curtiss & Joeleane Klaassen, Sadie and Elliot; Glenda & Auguste Gaudet, Lacey & Chase Tannahill, Sianna, Caleb, Owen; Amber Gaudet & Nathan Bueckert, Shawn Bueckert, Chloe Bueckert. He is predeceased by his parents Sam & Linda Boehr; his sister Elaine Engdahl; and his brother-in-law Gerald Funk. The come & go Viewing will be held on Saturday, September 11, 2021, from 2:00 p.m. until 3:30 p.m. at the Grunthal EMB Church, Grunthal, MB. Masks are required. The Funeral Service will be held on Saturday, September 11, 2021, at 4:00 p.m. outdoors at the Grunthal EMB Church. (please bring your own lawn chair). A private family burial will take place at Grunthal Cemetery. To watch the live stream of the service please visit Charles’ obituary at www.dalmenyfuneralhome.ca. Donations in memory of Charles may be made to Back to the Bible Canada.